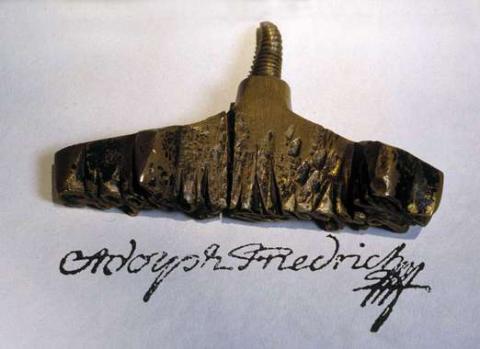 This picture is licensed under a Creative Commons 3.0 licence

Although it initially appears to be a rather mundane object, this stamp of the King’s signature tells a fascinating and important story about the nature of political power in Sweden during the mid-eighteenth century. That story tells us much about how little power Queens Consort could wield, and how the delicate balance of the foreign and domestic poles which constituted their identity could disturb the status quo of politics.

In 1756 Queen Luise Ulrike of Sweden, née princess of Prussia, conducted a failed coup against the Swedish parliament. Ever since she had arrived in Sweden in 1744 to become the wife of the then crown-prince Adolf Fredrik of Sweden she had gathered followers around her that were supportive of the idea of strengthening royal power. The political power in Sweden at the time lay mostly in the parliament and the two competing parties, the Hats and the Caps. To Luise Ulrike, who was brought up at the Prussian court in Berlin, and who idealized her brother Frederick the Great, the Swedish system was totally abhorrent.

The result of the attempted coup was disastrous. Some of the leading men who had supported the queen were executed, some punished in other ways, while some managed to escape abroad. The queen’s own fate was discussed: some thought she should be sent back to Berlin, others that the King should lose his throne and his family sent away. The general feeling was that the Queen was the person behind the events and in a position to make decisions on behalf of her husband. Consequently, it was decided that she would be given a lesson on how to behave in future. A delegation headed by the archbishop read her a statement in which she was told that her actions were the result of being brought up in a foreign court with foreign ideas about how a monarch should rule. Furthermore she was told that she must stop intervening in Swedish politics - after which she had to thank the archbishop for pointing this out to her. This was an exceptionally humiliating episode for a consort to be subjected to.

Her husband, King Adolf Fredrik, went through another sort of humiliation as a result of the failed coup. A name stamp that previously had been used for practical reasons - the King did not want to sign all documents and instead had many of them stamped with his name - now came into use for purely political reasons. After 1756, if the King attempted to refuse to sign a decision made by the parliament, the parliament would just take out the name stamp and have the decree signed against his will.

The coup, which intended to strengthen the monarchy’s position, ended in complete humiliation for Queen Luise Ulrike. The name stamp which can be seen in the picture is perhaps one of the most significant symbols of this. However, she did get revenge: when her son Gustav III executed a successful coup in 1772 the name stamp was abolished.