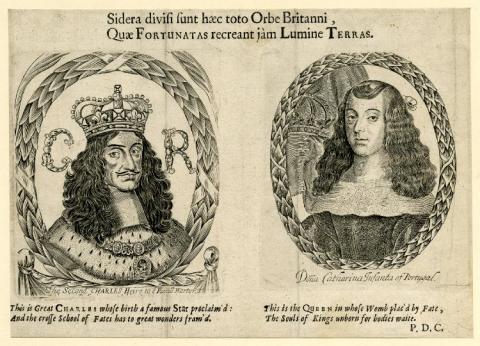 This single-sheet broadside, dating from 1662, was part of the extensive multi-media publicity concerning the marriage of Charles II of England to the Portuguese Infanta, Catherine of Braganza. Forming the frontispiece to an English translation of Pierre de Cardonnel’s Complementum Fortunatarum Insularum (1662), this was a foldout image which could be removed from the text and may have been plastered on the walls of households and public space to celebrate the marriage. There is more than a whiff of commercial opportunism here: the images of Charles and Catherine were clearly cobbled together from pre-existing blocks to create a new item for the market. Yet as a decidedly ‘Royalist’ piece of ephemera, they nonetheless convey simple but powerful messages about monarchy (Charles is depicted in full royal regalia) and the significance of this alliance.

Royal marriage was always a significant event in European politics – the stability and continuity of dynasties was intrinsic to the stability of the countries which they ruled, and the end of a dynastic line could trigger a disputed succession, cause considerable political vexation and even, in the worst case scenario, civil war. But in the case of the marriage of Charles and Catherine both parent countries were at critical junctures, with much invested in the marriage.

For Catherine’s native Portugal, the marriage was something of a diplomatic coup: having wrested itself from Spanish rule via a revolt in 1640, the Braganza rulers of Portugal had spent twenty years in political isolation, with no major European power acknowledging either their legitimacy as monarchs, or Portugal’s independence. Marriage to an English king, therefore, was more than an alliance: it was recognition of Portuguese sovereignty. For Charles’s England, the marriage seemed to offer the hope of much-desired stability. Charles II had acceded to the throne in 1660 after twenty years of unprecedented political chaos: Britain had undergone a series of Civil Wars in the 1640 which had culminated in the execution of Charles I (Charles II’s father) and eleven years of republican rule. The latter had culminated in a series of regimes whose brief tenures had proven disastrous and left the realm considerably unstable. Charles II’s ‘Restoration’ did not ultimately solve the constitutional issues at the root of Britain’s political turmoil, but in the early 1660s it did seems to offer hope of a much longed-for stability. This stability rested upon the continuity of the Stuart line – Catherine’s chief role as consort was to provide a son and heir.

This print illustrates that these were not issues considered exclusively by the great and the good, but rather filtered down to a much wider audience. The Latin inscription at the top of the print ties Charles’s return to Britain and Catherine’s arrival as heaven events intended to restore the light of the land. The verses lauding Catherine outline her raison d’etre and the much hoped-for stability it would provide:

This is the QUEEN in whose Womb plac’d by Fate,
The Souls of Kings of unborn bodies waite.

The quality here – of both image and verse – is, of course, terrible! But that reveals much, both about the intended audience – as cheap print, items like this had perhaps the widest readership in seventeenth-century society, and the verses’ pithy encapsulation of complex political issues allowed even the most humble to participate in affairs of state – and of the way in which Catherine was viewed. The image of her here is after her official portrait by the Dutch painter Dirk Stoop. Depicted here in traditional Portuguese dress and hair-style which were met with a balance of curiosity and disdain at the English Court, the broadside depicts the meeting of two cultures which even those in the alehouses whose walls images like this would adorn could understand. Stoop’s portrait had circulated widely in London both before the marriage and after, and, despite multiple official portraits which were painted subsequent to it depicting Catherine in a manner more customary at the English Court, it had a considerable after-life in English culture as a token of Catherine’s ‘foreigness’.