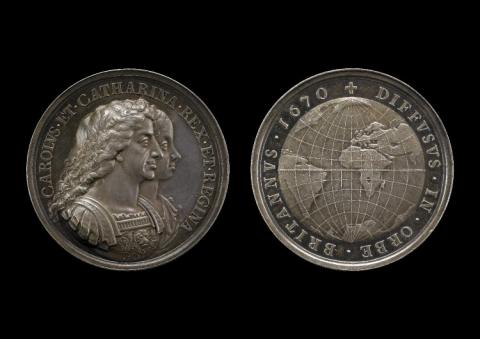 The inscription on this silver medal states its celebratory function clearly: DIFFVSVS . IN . ORBE. BRITANNVS. 1670 (Briton Spread Over the Globe). It referred to the growth of British power in new parts of the globe through colonies on the continent and islands of America, warfare against Barbary in Africa, and by the acquisition of territory in Asia (through the dowry of Catherine of Braganza, which brought England control of Bombay and Tangiers). The reverse of the medal shows the globe, and the obverse displays busts of Charles II in ornamental armour and Catherine in slight drapery – the allusion to imperial Rome is not hidden.

Given its timing, this was quite a piece of spin. The late 1660s had seen Britain humiliated in its war with Dutch, and concerns about its military power and ability to secure trade were rife, as were other concerns about its position in Europe more broadly. Corruption at court – with Charles positioned as an immoral and licentious king – was often blamed for such humiliations, with many commentators suggesting that they were divine punishment for the realm’s sins. Medals like this had been an important medium for representing the monarchy from the marriage of Charles and Catherine in 1662. Significant numbers survive of various degrees of quality and expense, suggesting that the monarchy could reach an ever-widening audience after the Restoration. Medals celebrating Catherine’s arrival, commemorating her marriage to Charles, and depicting the monarchy more generally, were clearly a ubiquitous part of the material culture at the time. Alongside a comparable growth in engraved images, we might see objects like these as providing new avenues for engaging with the public in an era where traditional representations of majesty seemed particularly unconvincing.

The use of empire to glorify Charles at a moment of considerable political difficulty is intriguing. It demonstrates that awareness of the importance of the world beyond Europe was important, and celebrates the king’s marriage to a queen who had (albeit inadvertently) played no small part in raising Britain’s imperial glory.