Genealogical Tree of the Jagiellons 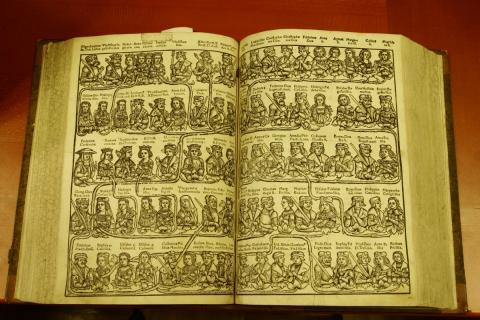 The genealogical tree, based on the tree of Jesse, is the first Polish woodcut with secular portraits from the Renaissance. It shows 87 members of the Jagiellon Dynasty, spanning five generations, on blossoms sprouting out of the branches of the tree, starting with Algirdas (top left) and ending with Izabella (born 1519), daughter of Zygmunt I (second row from the bottom, fifth from the left).

The individuals depicted are arranged in horizontal lines and presented in different poses (frontally, in three-quarters profile, from the side), on their own or in groups. The women are shown as equals of the men and have their hands crossed in front of their chest or hidden away in their sleeves. As with the men, their status can be identified by their clothing, in this case by their headdresses.