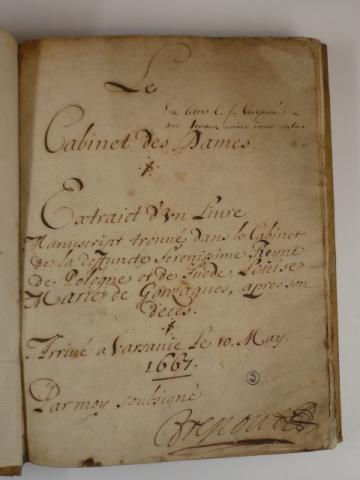 French Beauty Advice in Warsaw: A Book of Recipes

In 1667 among the possessions of the late Queen of Poland, Marie-Louise Gonzague de Nevers (1611-77), a curious French manuscript entitled Le Cabinet des Dames (‘the Cabinet of Ladies’) was found. The original has not survived, but an extract was copied in the eighteenth century and is now held in the Bibliothèque Polonaise in Paris.

The manuscript belongs to the popular early-modern Europe genre of ‘book of secrets’, a compilation of medicinal andcosmetic remedies typically addressed to women. Most of the recipes on the more than 150 pages of the Cabinet are devoted to the production of cosmetics, perfumes and women’s remedies. Over half of the manuscript provides recipes for a variety of potions and lotions. There are remedies for oily and dry skin, sun care, pomades for the hair and the lips, a paste to wash the hands without water, hair dyes, waters that promise to fight redness and preserve ‘beauty and youth’. Most of the skincare recipes, however, are dedicated to keeping the complexion bright and pale. In accordance with the canon of seventeenth-century beauty, the desirable fair skin was achieved thanks to ‘eau blanche’ and covered with powder.

In the Cabinet can be found many recipes for perfumes (for example for the famous l’eau d’Ange), fragrant formulas for clothing and handkerchiefs, and even for scented buttons. At the time Paris was becoming the perfume capital of Europe. The fashionable Parisian salon of the marquise de Rambouillet, frequented by the young Marie-Louise, was perfumed thanks to burning fragrant pastilles. A recipe for pastilles of this kind (rose-scented or smelling of l’eau d’Espagne) can be found in Le Cabinet des dames. The perfumed luxuries found their way to Poland even through nuns: the manuscript mentions that the Visitandines in the Warsaw convent founded by the Marie-Louise produced fragrant rosaries.

Most probably the book was written and compiled by the Queen, her French ladies-in-waiting and her court physicians. Some of recipes, as the remarks in the margins explain, were written by the Queen herself. She added, for example, one of the most extravagant formulas in the collection: the water of the Grand Duchess of Tuscany, a fragrant beautifying lotion made from pigeons, egg whites, extract of lilies, lemons and crushed oriental pearls. The advice and recipes circulated extensively between the courts of Europe and certainly the formulas from the manuscript came from different sources. Many of them were shared among theFrench aristocracy (‘the oil sent to the great princess by baron de Beausoleil’, ‘the powder of la Maréchalle’), some – written in Italian – originated in Italy, finally some (those using amber or salt from the Wieliczka mines) the Queen received in Poland. The Cabinet des dames was most probably copied and owned by French ladies-in-waiting successively married into powerful Polish houses. We can imagine that they travelled across the country with their compilation of female advice, exchanging the receipes and adding new ones.