Trade Relations Between Dresden and Naples 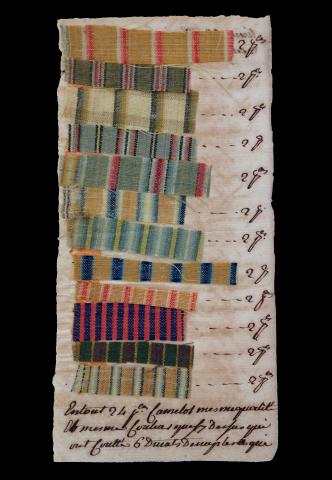 Since the sixteenth century, cloth had been one of the most important commodities produced in Saxony. After the Thirty Years’ War a series of attempts had been made to establish cloth manufactories, but they had repeatedly failed after a few years for lack of capital and because local merchants refused to deal in the cloth they produced.  It wasn’t until the 1720s that such efforts at larger-scale production began to be more successful. At the same time as the Saxons were trying to improve their manufactures, the King of the Two Sicilies was attempting to reform the stagnant economy of his kingdom and bring trade to the port of Naples. He initiated trade treaties with France, England, Sweden and the Dutch. The dynastic connection between Saxony and the Two Sicilies led the Saxons to hope that they too could trade successfully with Naples. First discussions relating to this began already in 1738, the year of the marriage of Maria Amalia and the King of the Two Sicilies but came to nothing.

In the late 1740s real attempts began to be made to initiate trade with Italy, but in particular with Naples. The Secretary to the Saxon embassy in Naples, Ludwig Talon, spent the period from 1749 to 1751 investigating the possibilities for trade between Saxony and various Italian centres. On his return to Dresden, he wrote a lengthy and very thorough account of all aspects of trade with Italy, from the goods imported and exported by other nations to weights, measures, tolls, trade routes and the banking system.  He was absolutely convinced that Saxon fabrics in general were of better quality, appearance and price than the same goods manufactured in France, England and Holland and that Saxon cloth would sell well in Naples. The government in Dresden did not pick up his suggestions, but private enterprise did try to put them into practice.

Between 14 September 1751 and 1 February 1752, in a correspondence in the Archivio di Stato in Naples, a trader called Balthasard Anglez sent six letters from Naples to a Captain Jäger in Dresden, enclosing samples of cloth to show the Saxons what they could sell in Naples if they could manufacture it. Spread over the 6 letters, Anglez sent sixty-two small strips of cloth in total, each about 4.5 cms long and about 1.5-2 cms wide. In his first letter, dated 14 September 1751, he includes 20 little strips of cloth and one larger brown piece laid in loosely and lists another 4 colours, saying that these are ‘toile de Rouen’, that is, fine linen, and asking Jäger to send him samples of camlet from Saxony to see whether it would go down well in Naples. (Camlet or camelot in French was usually a mixture of goat’s hair and silk and was used for clothing, bed curtains, etc). All the rest of the fabric samples sent from Naples, including the ones you see here, are of camlet and Anglez points out that, since it is used in Naples as lining material for summer clothes, the fabric would have to arrive there from Saxony by June at the latest.

These efforts by middlemen in the business community were seconded by the Saxon ambassador in Naples between 1749 and 1751, Alexius Graf d’Olonne (1693-1752), Ludwig Talon’s boss. Olonne made strenuous diplomatic efforts to get permission for the Saxons to open a consulate in the port of Naples and to be given the same customs privileges that the French, the English and the Dutch had. This little strip of cloth samples, pasted into a letter from Anglez to Jäger dated 1 February 1752, is just as much evidence of the cultural transfer brought about by the move of a foreign princess as is the exchange of works of art.