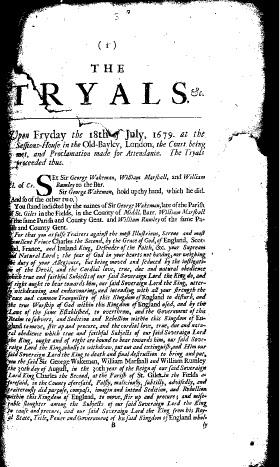 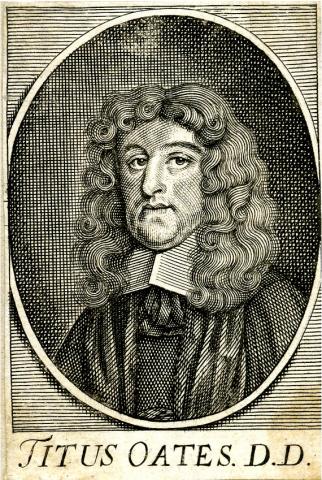 This pamphlet features an account of the trial of Sir George Wakeman (b. 1627), physician to Catherine of Braganza, Queen of England, Scotland and Ireland, and the wife of Charles II. Wakeman was acquitted of High Treason on 18th July 1679, having been charged with conspiring to poison Charles at the behest of Catherine of Braganza. These were some of the most sensational accusations resulting from the ‘Popish Plot’, an entirely fictitious conspiracy ‘discovered’ in 1678 by Titus Oates, an opportunistic perjurer who claimed that whilst in the employ of the Jesuits he had uncovered a European-wide plot to murder Charles II, massacre English Protestants and forcibly return the realm to Roman Catholicism. Wakeman was one of a series of high profile Catholics whom Oates accused. Oates declared that Wakeman had been offered £10,000 to poison Charles II (through the agency of the queen) but had obstinately refused the task until £15,000 was offered. The temptation then, according to Oates, was too strong. Wakeman, Oates charged, had attended a Jesuit consult on 30 August 1678, received a large sum of money on account and, with the promise of the further reward of a post as physician-general in the army, had agreed to poison the king.

Although at a distance of three centuries such accusations may seem well-nigh hysterical, in the context of the time the political crisis which surrounded them was understandable. Oates did little more than exploit the clichéd images and tropes of the anti-Catholicism which was a fundamental aspect of English culture and identity. Moreover, there were genuine concerns about what the ambitions of Louis XIV of France would mean for Europe’s Protestant nations (who were still recovering from the Thirty Years War). These concerns were exacerbated in Britain by Charles’ pursuit of a foreign policy which favoured Catholic France over Protestant Holland, and, under the auspices of Thomas Osborne, Earl of Danby, his adherence of a style of government which seemed to curtail Parliamentary privileges in the face of an authoritarian, ‘arbitrary’ style of monarchical power after the French king. The fear of ‘popery’ which Oates’ invented plot tapped into referred to both the Catholic religion and a French style of (tyrannical) government.

Most important of all, however, was the conversion of the king’s brother, James, Duke of York, to Catholicism in 1673. Given that Charles II had no legitimate heirs, this conversion meant that Britain faced the prospect of a Catholic monarch for the first time in over a century, and the ‘threat’ of Catholicism to Britain’s Church and State was therefore more real. The ‘discovery’ of the Popish Plot triggered the Succession Crisis (1678-82), during which the opposition party in Parliament (soon to be known as the Whigs) lobbied to alter the British constitution in order to safeguard its realms from ‘popery’. Measures ranged from an outright exclusion of James from the Succession, to a severe curtailment of monarchical power should he accede to the throne. Here unresolved issues from Britain’s Civil Wars and Restoration concerning the nature of monarchical and Parliamentary power re-emerged – a series of general elections, combined with a vast upsurge in printed political debate in newspapers, ballads, broadsides and pamphlets, led to the emergence of party politics, an expansion of the public sphere, and an increasingly representational style of politics in which the public were increasingly approached and massaged by those who intended to maintain positions of power.

The trials of those whom Oates accused of involvement in the plot were central to this process, and were pored over in finite detail in the press. Charles had to openly support Parliament’s prosecution of the plot to distance himself, his brother and the Crown from accusations of ‘popery’ and also to appear to be the ideal British monarch: a champion of Protestantism. The trial and execution of a number of high-profile Catholics in 1679 allowed him to do just that, but Wakeman – as the Queen’s physician – posed a problem. If he was found guilty, then the Queen – and, by extension, the Crown – was in a vulnerable position both to charges of ‘popery’ and to interference in monarchical privilege by Parliament (there had already been attempts to pressure Charles to divorce Catherine – with whom he had not produced an heir – and take a Protestant wife with whom he could secure the Succession). What is particularly interesting about the account of the trial pictured above is that it details how although just several weeks earlier the judge who presided over the trial, Lord Chief Justice Scroggs, had been leaning on juries to find the accused guilty, here he did precisely the opposite, berating Oates and the other prosecution witness and delivering a summation which left the jury in little doubt that they should not convict. Oates swore he had seen papers (from the Catholic hierarchy) appointing Wakeman to be physician-general and also his receipt for £5000 (on account of the £15,000). However, attention was drawn to the fact that Oates had been incapable of identifying either Wakeman’s person or his handwriting when he first accused him. Wakeman objected that Oates’s accusation was based on hearsay and brought evidence to prove that incriminating documents he produced were forgeries, and drew attention to his family’s loyalty to the crown during the Civil Wars and Interregnum. Scroggs commented severely on the character of the evidence, and the jury, after asking if they might find Wakeman guilty of misprision of treason, and being told they could not, found him not guilty.

Given the differences between these and earlier proceedings, it seems clear that Charles (and those surrounding him) had sent a clear message about what the outcome should to be, and the king was said to have wept with relief upon hearing it. Scroggs, the jury, Wakeman, Charles and Catherine were the subjects of vehement (and often scabrous) critique in printed and manuscript publications by those sympathetic to the opposition, but the failure to convict had cast considerable doubt on the severity of the plot and the reliability of Oates and his fellow ‘witnesses’, and closed off an avenue of attack on Charles through the queen. Over the course of the next eighteen months, the Crown slowly re-gained control of the realm.

Wakeman’s trial reveals to us how the ‘foreign’ nature of Queens Consort could cause fissures in the bedrock of the State and become a platform on which the vectors of political dispute intersected. Catherine of Braganza was known to be a pious Catholic, and her court and chapel were centres for Catholicism in London. Combined with Charles’ penchant for Catholic mistresses and the conversion of the Duke of York, the very visible presence of the Catholic ‘other’ in such close proximity to the king was a point of friction and, as Wakeman’s trial demonstrates so vividly, the Queen Consort could become an unwitting factor in political machinations, the consequences of which were played out to the lower orders through the cheap print publications of which this account of the trial must be included.