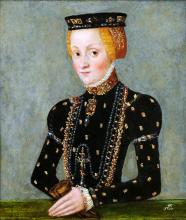 On 4th October 1562 the Polish princess Katarzyna Jagiellonka, sister of King Zygmunt August of Poland and Grand Duke of Lithuania, married Duke Johan of Finland, later King John III of Sweden and Grand Prince of Finland. She was thirty-six years of age.

The couple were married in the lower castle of Vilnius, Lithuania, without the permission of King Eric XIV of Sweden - Duke Johan’s half-brother - which added to the existing political tensions. Immediately after the wedding Katarzyna Jagiellonka began her journey to Turku Castle in Finland, arriving in late December 1562.