Conference Report: Queens Consort and their Cultural Opportunities and Achievements

Consorts and their Cultural Opportunities and Achievements

The second Marrying Cultures workshop, like the first one in Wolfenbüttel in July 2014, brought together historians of court culture and colleagues from museums in the UK, Sweden and Poland. As Helen Watanabe-O’Kelly pointed out in her introduction, one focus of the workshop was to show the continuous engagement of Britain with European dynasties, not just through dynastic marriage but through the importation of the House of Orange in 1689 and of the House of Hanover 1714. Another focus was the role that the Polish court played in international court culture throughout the period. 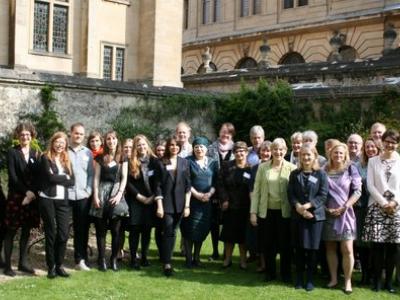 The workshop began on 15 April with a well-attended public lecture by the porcelain specialist Maureen Cassidy-Geiger (Dora Maar/Brown Foundation Fellow, Menerbes, France). She spoke on the topic of ‘Gender, Dynasty and the Politics of Porcelain: the Fact and Impact of Meissen Gifts to Sweden, Naples, Vienna and Paris, 1732-50’. Meissen porcelain, she explained, was worthless in itself, unlike silver or gold, but its novelty value and its workmanship made it the gift of choice for Saxon diplomats during the 18th century. She categorised Meissen porcelain as a ‘gift of national identity’ for the Saxons, in the same way that amber was a ‘gift of national identity’ for Brandenburg-Prussia.

In a session entitled ‘Constructing an Image’ Anna-Marie Linnell showed how British queenship was constructed in texts published at the time of the succession of James I as King of England in 1603 and Charles I in 1626, focusing in particular on the notion of the queens - Anna of Denmark and Henriette Maria of France - as intercessors. Adam Morton analysed a range of images, from prints to medals, to show how, after the interregnum, Charles II and Catherine of Braganza engaged with the public to evolve a popular perception of royalty.

Under the heading of ‘Marriages Good and Bad’ Britta Kägler discussed how Henriette Adelaide of Savoy-Piedmont brought French culture, in particular ballet, to the Bavarian court after her marriage to the Elector of Bavaria in 1652 and how this cultural transfer had to be carefully negotiated. Tracey Sowerby discussed the two foreign wives of Henry VIII, both of whom he divorced: his first wife Katherine of Aragon, to whom he was married from 1509 to 1533, and his fourth wife Anne of Cleves, to whom he was married for less than a year in 1540. The paper compared the experiences, patronage, cultural consumption and diplomatic interactions of the two queens.

In a session on ‘Marital Cultural Partnerships’ Katrin Keller demonstrated how August, Elector of Saxony, and his consort Anna of Denmark, functioned during their long marriage from 1553 to 1585 as a ‘working couple’ (Arbeitspaar), how they engaged in common interests such as collecting, gardening and alchemy, but how other spheres were divided between them, with Anna giving a lead in matters of pharmacy and fashion, while August concerned himself with architecture and knightly pursuits. Andrew Barclay discussed Mary of Modena (Maria d’Este), who married James II of Great Britain and Ireland in 1673. He showed how Mary connected the British court with the court culture of Baroque Italy, discussing such links as that between Edmund Waller and Torquato Tasso and between Benedetto Gennari, court painter to Charles II and James II, and Guercino, who served two generations of the Este.

In the next session on ‘Widowhood’, using the example of the Polish princess Zofia Jagiellonka (1522-75), Duchess of Braunschweig-Wolfenbüttel, Almut Bues showed the varied and extensive activities that a well-off widow could engage in. Zofia built an imposing palace and much-admired gardens, collected books, paintings and silver and carried out a wide range of charitable activities. David Parrott examined the varied political and cultural roles of Anne of Austria, Queen of France (1615-1666), from her most difficult period as queen consort to her widowhood and regency. He suggested that Anne was never able to define a satisfactory interpretation of her role as queen regent. Only with the death of Mazarin in 1661 could she turn her role of queen mother into one in which courtly and public esteem could be matched by political self-effacement. 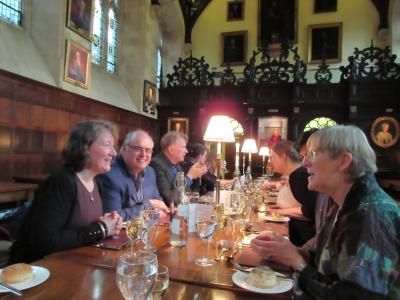 Members of the workshop at dinner in Exeter College Hall

The second day of the workshop was devoted to the cultural achievements of consorts. Catharine MacLeod showed how Anna of Denmark, consort of James VI of Scotland and I of England, was at the centre of new developments in British royal image-making, both in terms of the iconography of her portraiture and in her patronage of such artists as Jacob van Doort, Marcus Gheeraerts and Paul van Somer. Jacqueline van Gent discussed two generations of women of the Orange-Nassau dynasty: Amalia von Solms-Braunfels (1602-1647) and her daughters Louise Henriette (1627-1667), Albertine Agnes (1634-1696), Henriette Catharina (1637-1708) and Maria of Brandenburg (1642-88). She showed how they collected and displayed porcelain and other exotic objects in their palaces of Oranienburg, Oranienstein, Oranienhof and Oranienbaum to convey certain messages about their dynasty and about themselves.

Margherita Palumbo discussed the book collection of Sophie, Electress of Hanover (1630-1714), and her correspondence with Leibniz. She showed how Sophie collected and read not only novels, poetry and comedies, but also political essays, historical treatises and theological works, and how her library was divided into a section each for books in German, English, French and Italian. Emma Jay presented the libraries of Caroline of Ansbach (1683-1737), consort of George II of Great Britain and Ireland, and Charlotte of Mecklenburg-Strelitz (1744-1818), consort of George III. She discussed the context of their book collecting and how their libraries contrasted with those of their husbands.

Sara Smart discussed the cultural activities of Sophie Charlotte (1668-1705), Electress of Brandenburg (from 1701 Queen in Prussia), examining her role as an agent of cultural trasfer between her natal court of Hanover and the Berlin court. The paper showed how Sophie Charlotte patronised music, opera and ballet in Berlin, how she had the palace of Lietzenburg, later Charlottenburg, constructed and discussed her role in the founding of the Societaet der Wissenschafften in Berlin on the lines of the Royal Society in London and the French Académie. Barbara Przybyszewska-Jarmińska gave an account of the musical patronage of the royal Polish consorts Anna and Constance of Austria, the two wives of Sigismund III Vasa, of Cecilia Renata, daughter of Emperor Ferdinand II and wife of Ladislaus IV, and Eleonor Maria Josefa, daughter of Emperor Ferdinand III and wife of Michael Korybut Wiśniowiecki. The paper showed the gradual Italianisation of musical culture both at the Habsburg courts in Graz and in Vienna and at the courts of the Polish Vasas. No fewer than 10 dramme per musica were staged in Poland between 1635 and 1648.

The members of the Marrying Cultures team working on Poland and other Polish contributors to the workshop then held a meeting with four members of the Oxford project The Jagiellonians, Dynasty, Memory and Identity in Central Europe (http://www.jagiellonians.com) 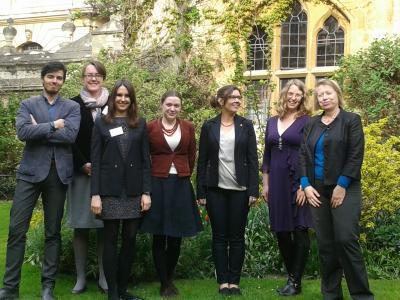 The workshop ended with a recital of ‘Music for Consorts’, given in Exeter College Chapel by Maria Skiba (soprano) and David Allen (organ), both members of the Marrying Cultures team. 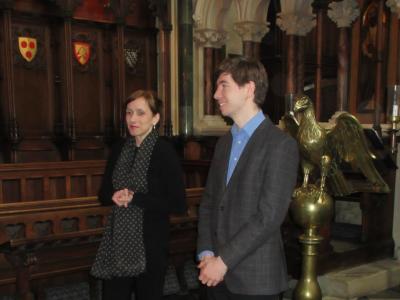