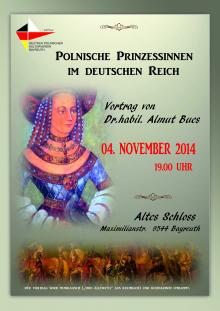 As part of the festival Interkulturelle Wochen Dr Almut Bues gave a lecture on 4 November 2014 in the Altes Schloss in Bayreuth. Her topic was ‘Polish Princesses in the Holy Roman Empire’, focusing on their role as cultural mediators and showing objects which exemplifyed the cultural transfer that occurred through them. The well-attended lecture was embellished by the music of the Allewyl Trio and the buffet provided by ladies of the German-Polish Cultural Society of Bayreuth.

A report on the lecture was published in a local newspaper, which can be viewed on the Media page.