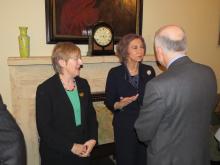 On 29 April 2014 Sofía, Princess of Greece and Denmark, Queen of Spain, visited Exeter College Oxford. She has been an Honorary Fellow of the College since 1989 in recognition of her work on behalf of contemporary literature and art in Spain. Helen Watanabe-O’Kelly, Emeritus Fellow of the College, was allowed to present the Marrying Cultures project to the Queen. She was particularly interested in Watanabe-O’Kelly’s research into her predecessor, Maria Amalia, Princess of Saxony, Queen of the Two Sicilies, who was Queen of Spain in 1759-60.