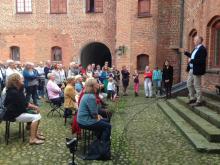 On Saturday 20 September the Marrying Cultures team was privileged to present some of its research findings to the general public in conjunction with the exhibition ‘Den dolda kvinnomakten’ (The Hidden Power of Women). This exhibition was organised by Baroness Alexandra von Schwerin, the present lady of the manor, at Skarhult Castle, near Lund in Sweden. The beautifully-presented exhibition presented twenty of her very diverse predecessors over a period of 500 years. The exhibition, which allowed visitors for the first time ever to visit the castle, attracted 30,000 visitors between April and September, including many school-children.

Professor Svante Norrhem introduced the presentations by giving a talk in Swedish on the role of the royal consort, illustrated with a variety of Swedish examples. Dr Almut Bues spoke about the effects of the Reformation on noble and royal women’s lives and Urszula Zachara-Związek spoke about women’s networks. Dr Jill Bepler described what widowhood meant for a consort, for good or for ill, while Professor Watanabe-O’Kelly and Dr Adam Morton spoke respectively about the consort as mother and about royal mistresses.