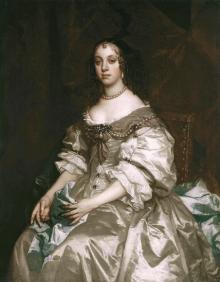 Catherine of Braganza (1638-1705) was the Portuguese wife of Charles II, King of England (1630-1685) from 1662-1685. Catherine was born into the House of Braganza, the most senior noble house in Portugal. Her father, John, 8th Duke of Braganza, was proclaimed King John IV in 1640 after leading a rebellion which ended sixty years of Spanish rule in Portugal. Portugal was not recognised as a state by most European powers (this was due to Spain disputing the legitimacy of its independence), and the marriage of Catherine to a foreign prince was therefore a vehicle of gaining some recognition. Plans in this regard are largely thought to have been masterminded by Catherine’s mother, Queen Luisa. After attempts to secure an alliance with John of Austria and Louis XIV of France failed, Charles II – newly restored as King of England following civil war and eleven years of republicanism – became the most attractive suitor. The marriage of Charles and Catherine, then, was a source of political stability and legitimacy for both of their respective houses.

The attractiveness of Catherine to the English Crown was due in large part to the huge dowry which the Portuguese offered, alongside colonies including Bombay and Tangier, as part of the marriage treaty. That the vast majority of the dowry remained unpaid was a significant source of tension, and undoubtedly constrained Catherine’s ability to become a political actor in England. More significant was Catherine’s «failure» to produce an heir to the English throne (the main purpose of a Queen Consort), and the fact that her life at court was dictated to a significant degree by her rivalry with Charles II’s mistresses, most noticeably Barbara Palmer and, latterly, Louise de Kéroualle. Despite this somewhat pessimistic picture of Catherine’s significance, more recent research is beginning to suggest that she had considerable agency in areas of culture – whether her impact was as large as Henrietta Maria (the Queen Consort of Charles I of England) remains to be tested; as does the extent to which her presence impacted upon English Catholicism.

Following Charles II’s death in 1685, Catherine remained in England throughout the reign of James II and, following the Glorious Revolution of 1688/9, into that of William and Mary. Her relationship with the latter was strained (largely by questions of Catherine’s Catholicism) and Catherine returned to Portugal in 1692, where her brother Peter II was King. Following bouts of illness he suffered in 1701 and 1704-05, Catherine became the regent of Portugal. She died at the Bemposta Palace in Lisbon on 31 December 1705 and was buried at the Monastery of São Vicente de Fora, Lisbon.

The two legends which she is often associated with – the introduction of tea into England and the naming of the New York borough of Queens after her – are not significantly substantiated by any contemporary source material.