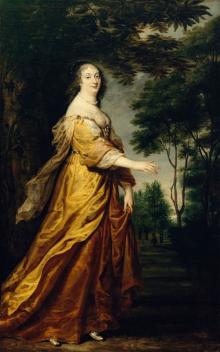 Marie-Louise Gonzague de Nevers (1611–1667), Queen consort to two Polish kings, Władysław IV Vasa, king of Poland, and after his death, to his step-brother and successor, Jan II Kazimierz Vasa. According to early prognostics, ”she was born to reign”; thus, after failed fiançailles with Gaston d’Orléan and a wretched romance with marquis Cinq-Mars, Marie-Louise eagerly accepted the Mazarin’s plan to marry her to the recently widowed Polish king, Władysław IV Vasa. Wedded per procura to the king in Paris in 1645, the thirty-four-year-old bride arrived in Poland. ”Not yet Polish in heart, but not longer French”, Marie-Louise styled herself Ludwika Maria from then on. The union with Władysław was not very successful, and after fewer than three years, it was ended by his death. Soon, Ludwika Maria married the new king, Jan II Kazimierz Vasa. Strong and energetic, she became an important political actor, advancing reforms and actively participating in military operations at the time of war with Sweden. Her contemporaries mocked the influence she had over her second husband by comparing the royal couple to ”an Ethiopian leading an Elephant”.

The intellectual background of the Queen was by all means exceptional. She had an excellent education supervised by Michel de Marolles. As a girl, she had a close connection with Marie de Gournay, Montaigne’s fille d’alliance and the editor of Essais, considered the most learned woman of her time. The future queen of Poland frequented the famous salon bleu of Madame de Rambouillet, and during her last years in Paris, she instituted her own. Ian Maclean underlined the role of Ludwika Maria in the rise of seventeenth-century feminism, which maintained the intellectual equality of the sexes and advocated the education of women and the development of social and political awareness.

In addition to her political activity in Poland, the Queen engaged in numerous projects that spanned the fields of literature, theatre, natural science, and astronomy, among others. Her activity ranged from founding the first Polish newspaper Merkuriusz Polski (named after Mercure de France) to staging Corneille’s Cid in Warsaw, to supporting the construction of a machine de Pologne, a flying dragon, by Italian polymath Titto Burattini. Most importantly, the Queen had huge agency in challenging the cultural and social life of aristocratic women in Poland. At the time of her reign, traditional feminine virtues such as piety, modesty and obedience to her husband were gradually replaced by the ideals of the femme savante, a learned lady participating in social and political life. Instead of devoting themselves to domestic affairs, women at the court developed a taste for erudite conversation, the reading of popular novels, balls, promenades, games, and ruelles. Ludwika Maria promoted new forms of female piety by establishing new religious orders in Poland, the Visitandines and the Daughters of Charity. She maintained a close relationship with the Jansenists circle of Port-Royal and first and foremost with a feminist nun, Angélique Arnauld. The Visitation convent founded by the Queen in Warsaw established the first Polish institutional school for girls.

Ludwika Maria’s activities and involvement (or ”meddling”) in political activities caused strong anti-French sentiments amongst Polish noblemen. They were shocked by the daring Parisian fashions sported by the Queen and her ladies-in-waiting, their independence and their sexual freedom. Even French nuns were denounced for wearing fancy dresses and coiffures. It seems that despite this male criticism, Polish noblewomen welcomed new forms of feminine behaviour; nevertheless, the scope of the Queen’s impact still needs to be addressed.

This project aims to reassess Ludwika Maria’s reign in the context of feminist activities by looking at her court from not only a Polish perspective but also a French perspective. Her life and intellectual activity in Nevers and Paris have been little studied even though this study can provide a better understanding of her patronage and political agenda in Poland. It will also analyse the artistic and literary production sponsored by the Queen, with a special reference to works whose main theme was the glorification of women (e.g., portrait of Ludwika Maria by Ferdinand Bol, the poetry celebrating pregnancy and childbirth by Saint-Amant). Finally, the project will examine the different attitudes of Polish noblemen and noblewomen toward the feminism of the Queen.