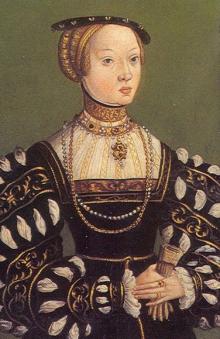 Elizabeth of Austria (1526-1545) was the eldest child of the Habsburg king Ferdinand I and Queen Anne of Bohemia and Hungary. Her marriage to the future king of Poland, Sigismund Augustus (1520-1572), son of King Sigismund I and Queen Bona Sforza, was planned almost from her birth. The first contract containing the terms of marriage was signed in 1530, when the princess was 4 years old. Some of the conditions were clarified in the second contract, signed in 1538. The wedding took place in Cracow on 6 May 1543, and the celebrations lasted for several days, which we know from contemporary descriptions in German festival books and from the diary of Baron Sigismund von Herberstein, the Habsburg envoy who accompanied Elisabeth. These documents point out the splendour with which Princess Elizabeth was greeted in Poland. The surviving inventories also provide information about the gifts that the young wife received.

The daily life of the young royal couple did not work out well, however. King Sigismund Augustus was not an independent ruler (his father Sigismund I was still alive) and he did not have his own residence. All the signs indicate that the 17-year-old Elizabeth did not gain the sympathy of her husband right from the beginning. She had received a thorough but strict upbringing in Innsbruck, and Sigismund Augustus was accustomed to a freer lifestyle in his mother’s Italian household. The couple spent a significant part of their two-year marriage apart. Elizabeth first stayed in the Wawel Castle, while her husband went to Lithuania. Later she joined him and for some time the couple lived together in harmony, as the observers pointed out. While Sigismund Augustus was staying in Poland, the 19-year-old Elizabeth died in Vilnius on 15 June 1545 after a series of epileptic seizures.

Queen-Elect Elizabeth could not develop any broader cultural activities at the royal court in Cracow and Vilnius. This was due to the situation at court – the lack of independence in Cracow, where the dominant position was occupied by queen Bona and her Italian environment, as well as the lack of adequate funds for the organization of her court, because Elizabeth’s dowry was paid in full only a few months before her death. One should not forget either her personal situation - her shyness, which could hinder the active functioning at the court.

Catherine of Austria (1533-1572) was the seventh child of Ferdinand I of Habsburg and Anne of Bohemia and Hungary and therefore Elizabeth’s sister. When she was 16 years old, in 1549, she was married to the Prince of Mantua, Francesco III Gonzaga. The marriage lasted only about four months, due to the death of her husband. After this event, Catherine did not stay in Mantua as a widow, but returned to the family court in Innsbruck. At the age of 20 she remarried, as his third wife, the Polish king Sigismund Augustus, her brother-in-law. Unlike her older sister’s marriage, this time the negotiations went very smoothly. The marriage contract was signed at the end of June 1553 in Vienna, and the wedding took place on 31 July of the same year. The course of events is known from contemporary accounts by Stanislaw Orzechowski and Łukasz Górnicki, as well as from the diary of Baron Sigismund von Herberstein, who accompanied Catherine during her journey to Poland. The new queen was welcomed with great pomp, and she was also presented with many expensive wedding gifts, which are mentioned in the inventories.

As with the marriage of Elizabeth, Catherine’s dealings with Sigismund Augustus were difficult. The Polish king disliked his new wife and expressed this openly in correspondence with state and Church dignitaries. For her part, Catherine also had an antipathy to her second husband, whom she blamed for the death of her sister Elizabeth. Though she tried to win his favour, it turned out to be impossible. The spouses spent most of the time apart and, though they corresponded frequently, their letters, written in Latin (despite the fact that they both spoke Italian and Sigismund Augustus also knew German) were very formal in tone.

Catherine’s position at the Polish court was stronger than that of her sister Elizabeth, primarily due to the fact that Sigismund Augustus was already an independent sovereign, and the influence of queen Bona had been significantly marginalized (she left the country in 1556). Queen Catherine tried to build a political party around herself and also wanted to represent Habsburg interests in Poland. She tried to intervene with Sigismund Augustus and to advise Habsburg envoys before their audience with the king. These activities met with opposition from Sigismund Augustus, who was trying by every means to isolate his wife from current politics, giving her Radom as a residence, a place that was distant from the main centres of political life in Poland.

Despite the initial efforts of the spouses, the marriage of Sigismund Augustus and Catherine disintegrated. Although the Habsburgs did not agree to a divorce, in 1566, after 13 years of marriage, Catherine left Poland and settled in Linz, where she resided until her death on 28 February 1572. Sigismund Augustus and Catharine hardly maintained contact by correspondence, Catherine had also problems with receiving regular income from her lands in Poland.