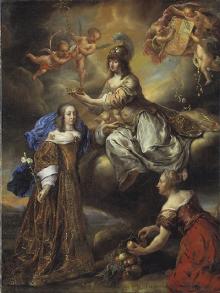 Hedwig Eleonora (1636-1715) was the sixth of sixteen children born to Friedrich and Marie Elisabeth of Schleswig-Holstein-Gottorf. She was one of the six daughters of the couple who lived to adulthood and although her early youth was marked by the Thirty Years’ War, her home court at Gottorf was a vibrant cultural centre which attracted artists, poets and scholars and her father financed expeditions to Moscow and Persia. Her paternal grandmother was Augusta of Denmark, sister to Anne of Denmark, Queen of Scotland and Engand, and her maternal grandmother was born a Princess of Prussia who became Electress of Saxony. Both women assembled important collections at the courts in Gottorf and Dresden. In 1654, just after the sensational abdication of Queen Christina of Sweden, Hedwig Eleonora married her successor Karl X. Gustav (1622-1660). This royal alliance was seen as a coup, but it drew the Duchy into the prolonged conflicts between Sweden and Denmark that marked the rest of the century. Throughout the more than 60 years that Hedwig Eleonora spent in Sweden as Queen Consort, Queen Regent and later Queen Dowager, she remained in close touch with her family in Germany. She was also a focal point for her husband’s German relatives. Like her famous contemporary Elizabeth Charlotte, Princess Palatine, who spent a comparable period of time in Paris, Hedwig Eleonora’s networks increased over time as her sisters married into ruling houses in Germany and her nieces and nephews in their turn forged new alliances. From the very beginning, for all these family members, having a queen in the family shifted the balance in their personal relationships and in relationships within the dynasty itself, but also in the broader political and confessional arena as the ”Queen of the North” came into play as an agent of potential intercession or patronage. These strong ties of ”friendship and blood” determined patterns of collecting and indeed one of Hedwig Eleonora’s lasting passions was her collection of German family portraits and her interest in genealogical studies.

The portrait painted by Jürgen Ovens just before her marriage in 1654 in Gottorf and taken by the young princess to Stockholm as part of her dowry has a symbolic meaning. It shows her being crowned by the Goddess of Wisdom, Minerva. It immediately recalls the portrait busts of the former Queen of Sweden, Christina, who was often depicted as Minerva. But there is a subtle difference: in this representation the new Queen is not claiming to embody wisdom, but to be guided by it, an indirect message of moderation which she upheld in her public persona for the next 60 years. There is also a difference between the ethos of a princess born and educated to rule like Christina and a princess born to become part of what the historian Heide Wunder has defined as the early modern working partnership of man and wife (”Arbeitspaar”), whose duties were shared and clearly apportioned. Those of the wife were in no way less effective than those of the more visible male partner for the fact that they were played out in ostensibly unpolitical arenas often to do with piety, dynastic relations and cultural self-fashioning. It was often in these areas that the closest ties were retained with a consort’s home dynasty, but they could also unexpectedly become politically highly charged and call loyalties into question. In the case of Hedwig Eleonora, her female relatives appealed to her to intervene on their behalf in matters of succession, confessional politics, inheritance and of the education and placement of their children.

The lasting effects of Hedwig Eleonora’s cultural patronage as Queen of Sweden are most visible in the buildings she commissioned and furnished, most prominently the Palace of Drottningholm. The significance of Hedwig Eleonora’s contribution to Sweden’s national heritage has recently come into focus and in 2015 she and her architectural monuments and collections will be the subject of a large exhibition to be mounted in Stockholm by one of the Marrying Cultures partner institutions, Husgerådskammaren (The Royal Collections). The Marrying Cultures project will contribute to the ongoing discussion by looking at Hedwig Eleonora not from a Swedish but from a German perspective and by examining the female networks and the practices of collecting, particularly book collecting, that informed her upbringing. The courts of her parents in Gottorf and of her maternal grandparents in Dresden were centres of female book collecting and thus form an essential part of this study. Due to the castle fire of 1697 in Stockholm many books belonging to the Queen were destroyed and only traces of her own collections remain. Evidence of the reading and writing associated with the education of young relatives at her court, above all with her niece Magdalena Sibylle of Hessen-Darmstadt (1652-1712), who spent part of her youth (1666-1673) at the Stockholm court shows how books were exchanged as part of the lifelong correspondence between the two women. The extant evidence of Hedwig Eleonora’s book acquisitions and the book catalogue belonging to Magdalena Sibylle, who in 1673 became a Duchess in Stuttgart and like her aunt in Sweden was widowed as a young woman and acted as regent for her son, will form the nucleus of the first part of the project. The collection of over 800 works belonging to the Duchess show her lifelong interest in Scandinavia and Swedish literature and the arts. Hedwig Eleonora also remained in touch with her sisters in Gottorf, Mecklenburg, Zerbst and Baden-Durlach and their correspondence and collections will also be included in the study.